Indonesia is like a kaleidoscope, whose many splinters are strewn across the temperamental Indian and Pacific Oceans. White sandy beaches and lush forests; heads bowed in the direction of Mecca, and worshipers kneeling in a Hindu temple; a mass of tourists and motorcycles, and endlessly peaceful deserts: the country has a thousand and one faces, with a different feel every way you turn.

Its nature is incredibly rich, with volcanic mountains, dense jungles that are home to all sorts of reptiles, multi-coloured butterflies and little monkeys, as well as a shoreline lined with coral reefs. Monsoons lay a carpet of lush greenery over the slopes of coffee plantations and paddy fields, which are a vital part of the nation’s fabulous gastronomy. From Nasi Goreng for breakfast to ketupat cooked in interwoven leaves, rice always takes centre stage, brought to life with flavors and spices. What more do you need to bring together the many ethnic groups that between them speak more than 700 different languages and dialects, and have created an incredibly complex culture over the centuries. Of all the gems of the archipelago, it has to be Bali, the Island of Gods, that wins the popular vote. But Jakarta, Java and Lombok are attracting a growing numbers of visitors, and remote outposts such as the Gili Islands are becoming popular with surfers, scuba divers and travellers keen to get off the beaten track. If you remember that the country is the largest archipelago in the world, with around 17,508 islands, the potential for new discoveries seems endless.

Explore our destinations in Indonesia 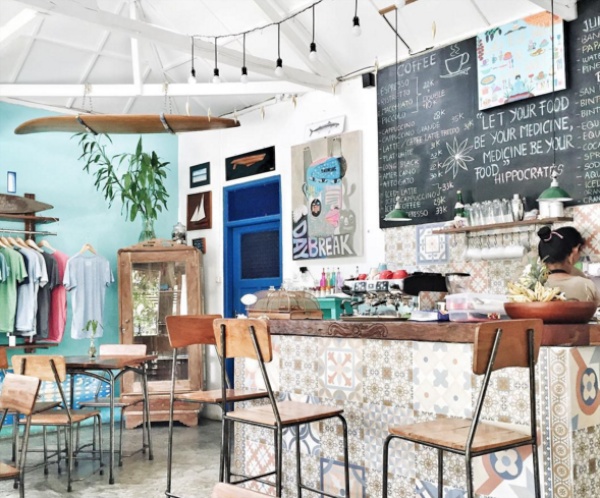 With its white walls adorned with surfboards, bicycles and the latest chalk-board menus, the cosy Se...

With its white walls adorned with surfboards, bicycles and the latest chalk-board menus, the cosy Secret Café Nusa Dua offers a warm welcome and a homely atmosphere. Coffees and cakes emerge from behind the beautifully tiled counter, delivered to a handful of colourful tables filled with locals, surfers and in-the-know travellers.