It is known as the “Maximum City”. Lapped by the saltiness of the Arabian Sea, the island of Mumbai, the biggest city in the Indian sub-continent, brings its hopeful and exaggerated dreams together, turned towards a future in fast gear. Behind the ultra-modern glass, concrete and steel architecture of the Bandra Kurla Complex or Nariman Point, beats the economic heart of India, while Bollywood studios call to mind that Mumbai is the land of possibilities. Everywhere bold skyscrapers and luxury malls, High Street Phoenix in the lead, rise up in a flash, creating an endless megalopolis which serves as a backdrop to Marine Drive. The “Queen’s Necklace” extends its long tarmac promenade along the seafront.

Yet Mumbai is not limited to its captivating modernity. At the far south of the “City of Gold”, a mixed crowd occupies every square inch of Colaba, like everywhere else in Mumbai, where 20 million people live together and, caressed by the sea breeze, it converges towards the triumphal Gateway of India. The iconic stone arch, intrinsically linked to the former British Empire, perpetuates the memory of a past which is still visible. In the adjacent streets, colonial buildings in elegant style, a unique mix of Victorian, Art Déco and Indian architecture, bow under the weight of the decades. These high façades disseminate an old-fashioned atmosphere – you could almost expect to see Rudyard Kipling show up here. This nostalgia for a bygone era resurfaces at the Chhatrapati Shivaji Terminus station, gives a patina to the legendary Taj Mahal Palace hotel or even the Leopold Café, one of the oldest in the city.

A stone’s throw or two away, the National Gallery of Modern Art testifies to the Indian megacity’s creative DNA. There, as at the Nehru Centre or the Jehangir Art Gallery, the exhibitions are unanimous: the talent of the young generation of Indian artists is a force to be reckoned with. Their buzz originates in an old Portuguese enclave with its appeal preserved, transformed into a trendy district, Bandra West. It is here that the Zeitgeist is moving. For if the large open-air bazaars congested with rickshaws, Chor Bazaar, “thieves market”, or Zaveri Bazaar, “the jewellery market”, remain a must in an Indian-style shopping experience, Bandra West lines up concept stores with specialised ranges. Restaurants are just as many, enlivened by high-quality street food, a refined gastronomic tradition which uses spices with panache, and a cosmopolitan essence. Joël Robuchon was not mistaken: he is opening his first establishment in Mumbai in 2016.
At Bandra, as at Colaba and Malabar Hill, the trilateral of nightlife, Mumbai never sleeps, haunted by the appearance of the stars of Bollywood and the Mumbai Film Festival.
Because, more than Holi and its coloured pigments thrown to the four winds, more than the celebrations for  Indian Independence or the Proclamation of its Republic, it is the life dreamed in technicolour projected on the big screen which manages to unite Mumbai’s diverse population with the same enthusiasm. Otherwise, what common trait would there be between a worker at Dhobi Ghat, the world’s largest open-air laundry, the Muslim bowed at the Haji Ali Mosque, the Hindu of the ISKCON Hare Krishna Temple, a young woman in a sari from the vast Dharavi slum, the setting for the film Slumdog Millionaire, and the rich young things of Malabar Hill? 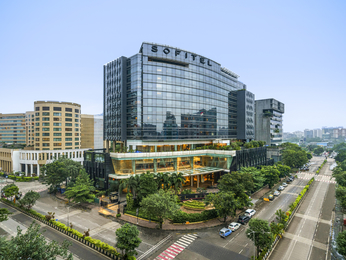 Mumbai has a tropical savanna climate, with hot and humid weather and low variations in average temperature. The hottest month in Mumbai is May with temperatures around 32°C and the coldest is January with 24°C. The wettest and most humid months are during monsoon season from June to August with very strong rainfall, reaching an average level of almost 700 mm.
The best period to visit Mumbai is between November and March when the weather is dry and mild. 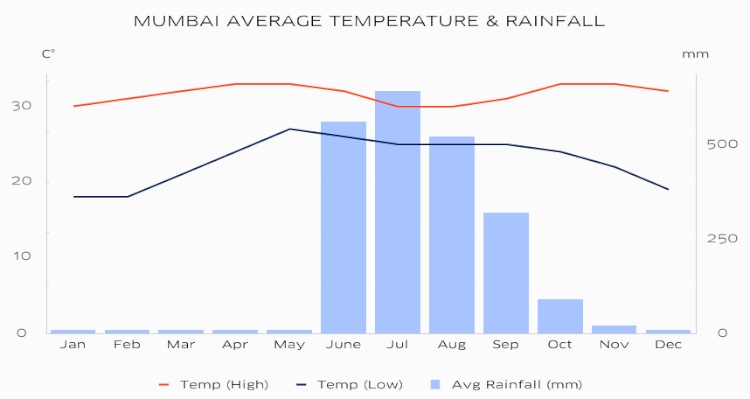 Transportation in Mumbai includes many options: fleets of local cabs and auto/cycle rickshaws, private drivers, rental car, bus, ferry and the brand new monorail. However, in Mumbai it is much more convenient to book a taxi or a car with a driver, even though the traffic can be chaotic. Keep in mind that when driving in Mumbai, you must drive on the left side of the road.
Cycle-rickshaws are very convenient to visit the historic area of Mumbai, but are not allowed in many parts of the new town. We highly recommend negotiating the fare in advance before starting the journey (expect to pay around IND 10 per kilometre).
Several transport companies operate an important network of bus lines covering the greater metropolitan area of Mumbai. However, we do not recommend this as a primary form of transport since the buses can be slow and are often very crowded.
A brand-new metro has been operating in Mumbai since 2014. Until now, it only has one line composed of 14 stations and covering a distance of 11 kilometres. The network should be extended within the next few years with 3 additional lines. A monorail has also been inaugurated the same year (with 3 more lines to be built).
Metro and Monorail are both very comfortable, fast and reliable.
Trains run from 6am to 11pm and can become incredibly busy during peak hours (especially around 9am and 5pm). Expect signs and arrival/departure announcements in Hindi and English. A one-way trip starts at INR 10.
There are approximately 58,000 ​taxis, the iconic black and yellow Fiat, and 250.000 rickshaws that ​operate in ​greater Mumbai at different times of the day and night.
You can hail them in the street, find them at a taxi rank or book them through one of Mumbai’s taxi firms. The CoolCab are air-conditioned, which is always an advantage during the hot and humid months of summer.
The flag fall is a standard INR 21 for the first 1.5 km and each additional kilometre is INR 14 (INR 23 and then INR 15.50 for a CoolCab). Taxis usually charge twice the fare of the auto-rickshaw. Fares are systematically increased for foreigners, so don’t be afraid to negotiate.
Mumbai International Airport (Chhatrapati Shivaji International Airport) is​ located approximately 20 km north from Mumbai city centre. The journey by car takes approximately​ 1 hour but can vary greatly depending upon the traffic. Private transfers, rental cars and air-conditioned and metered taxi  can be arranged and booked at the airport. Meru Cabs charges INR 27 for the first kilometre and INR 20 per additional kilometre There is also a 25 % night charge. A regular cab (non air-conditioned and metered) should be around INR 400-700, depending upon the destination in Mumbai and the time of the day/night. Make sure to confirm the price before entering the vehicle.
You can also take a train at the station of Andheri (INR 60 by auto-rickshaw from the airport). From there, the Churchgate or CST Train will take you in 45 minutes and for INR 9 to downtown Mumbai. Please note that this is only a suitable option if you’re arriving outside peak hours and are not weighted down with luggage, as the trains can be particularly busy.
Mumbai 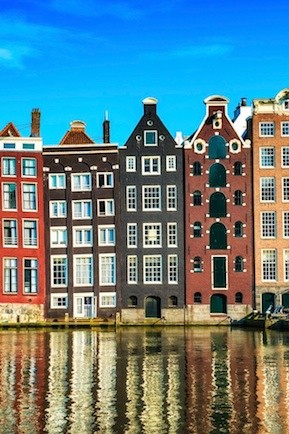 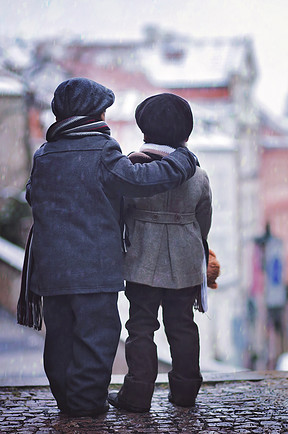 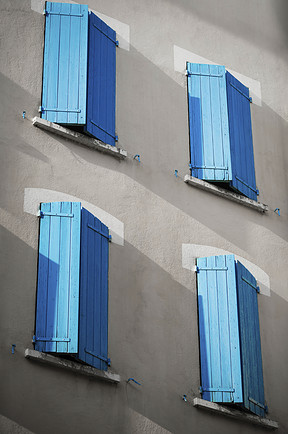 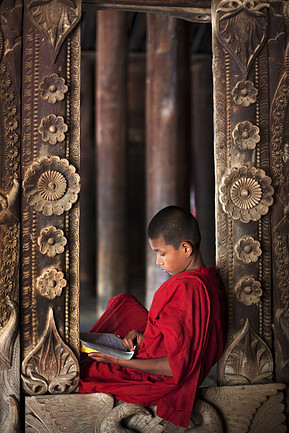